American Whiskies including Bourbon and Tennessee Whiskey have been gaining market share against other beverage alcohol categories for over twenty years. This has led to rapid expansion of existing and established American Whiskey brands along with an explosion of new micro-distilleries. For example, ten years ago there were three beverage distilleries in Tennessee. Today, there are over forty.

Added to the general chaos that rapid growth brings, other pressures threaten to degrade the quality and character of product coming out of established whiskey categories and threatens to destabilize the consumer experience. These influences are not limited to but include modern biotech capabilities and the products which come from biotech(such as commercial enzymes and genetically modified organisms), modern industrial capabilities and the process changes these bring, sustainability efforts, changing regulatory requirements such as those brought about by FSMA, accelerated cost cutting and continuous improvement effort driven by a more competitive and global market, and a general shortage of expertise that accompanies rapid growth.

Despite being the largest whiskey brand, the Jack Daniel Distillery maintains and preserves the most traditional practices in the art of whiskey making. Accompanying the upward trend in whiskey sales is an increased consumer thirst for knowledge about the science of whiskey making. This presentation intends to satisfy that thirst by defining the terms “Craft” and “Authenticity” in the context of process.

For my friends in the fuel ethanol industry, this presentation provides a comparison/contrast between the typical dry grind ethanol pant covering the topics of conversion, yeast management, fermentation, and distillation processes. 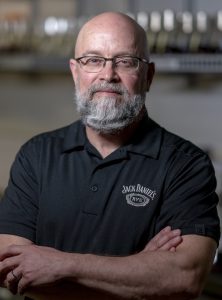 Originally hired by Brown-Forman as a R&D Microbiology Laboratory Technician in 1995 , Kevin took a position as a Quality Control Specialist at the Jack Daniel Distillery in Lynchburg, Tennessee in 1998.

In 2003, Kevin transitioned to and spent four years in the Fuel Ethanol Industry first working for Commonwealth Agri-Energy as Plant Manager/Lab Manager in Hopkinsville, KY. In 2005, Kevin was hired by Lallemand Ethanol Technology and moved to central Iowa (Alden). A year later, He was promoted by Lallemand and served the larger Fuel Ethanol Industry as a Technical Manager. Lallemand is a vendor of yeast, yeast nutrition and antimicrobials to the fuel ethanol and beverage alcohol industries and provides consultative services helping plants to optimize fermentation and maximize distillery yields.

In 2007, Kevin was recruited back to Jack Daniel Distillery in the role of Whiskey Technical Resource/Microbiologist. It was a difficult decision to leave behind the challenges and excitement of the Fuel Ethanol Industry but it was impossible to resist a return to the nuanced complexities of the Beverage Alcohol Industry. In 2010, Kevin was promoted to Manager of Distillery Quality Control & Technical Services managing fermentation, charcoal mellowing, whiskey gauging and barreling processes while still maintaining production microbiologist duties. He served in this role until being promoted to his current position in 2014.

Kevin holds a Masters of Science Degree in Environmental Biology with an emphasis in Microbiological studies from the University of Louisville.